Many contemporary artists have been compelled to reexamine the cultural and political implications of traditional notions of gender as a biological and social truth. Through their artistry, they interpret and redefine predetermined gender roles. In fact, reframing rigid notions of masculinity, femininity, and the validity of gender itself has been a driving force in late 20th- and early 21st-century visual art. Artists employ radical representational strategies and sophisticated masking techniques, inversions, parody, satire, and more to explore the social and political dynamics of gender in contemporary society. Here we consider the diverse works of Fritz Scholder, Lalla Essaydi, Frank Marshall, and Mickalene Thomas, who examine gendered stereotypes and their racialized components. 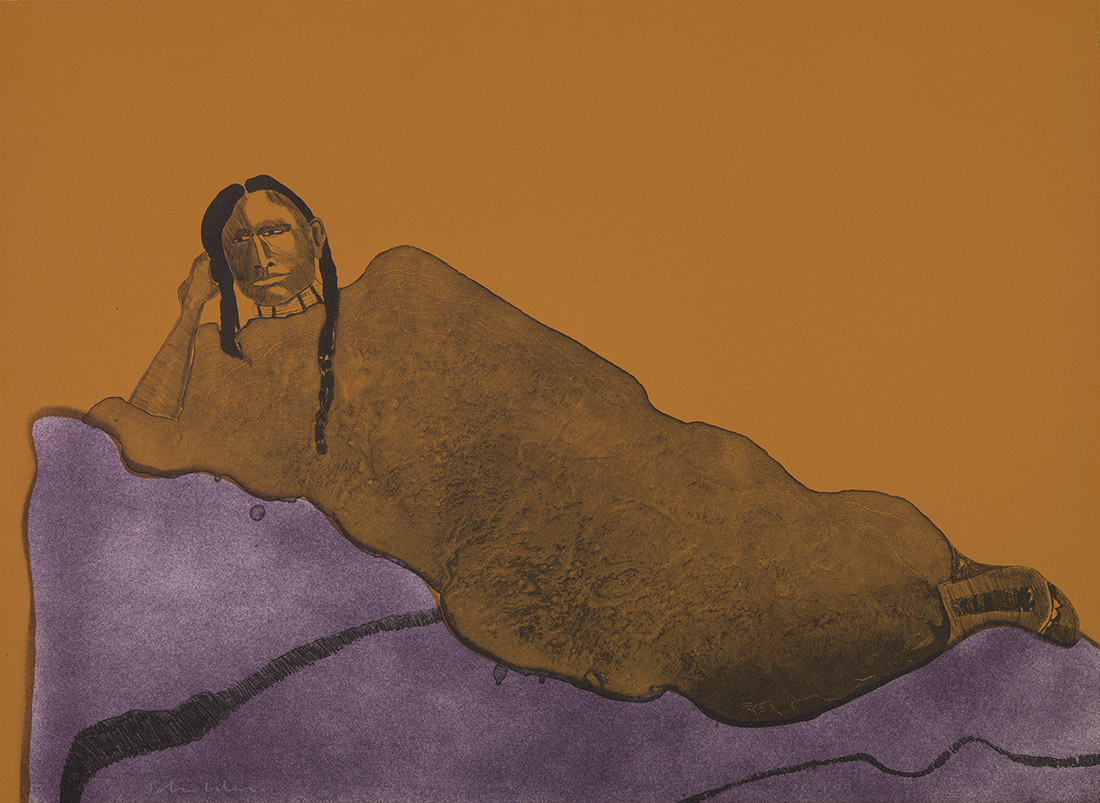 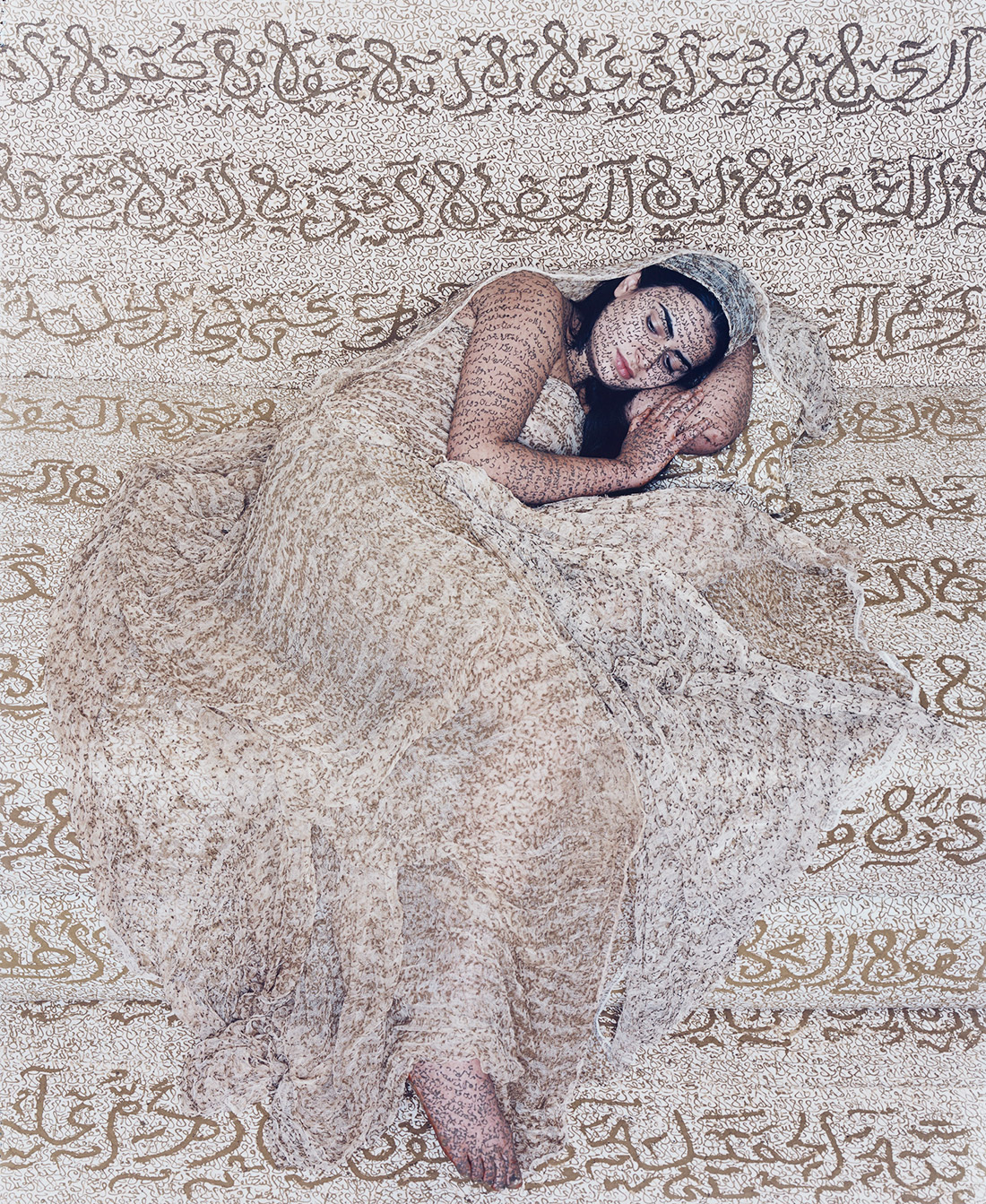 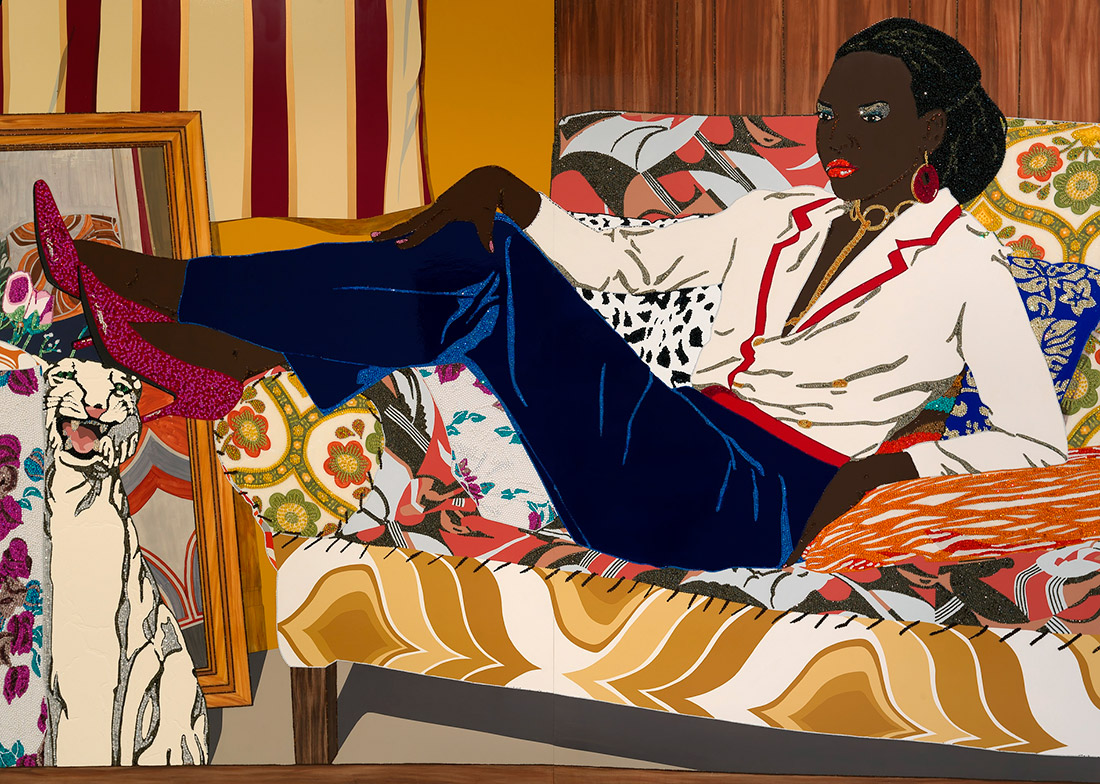 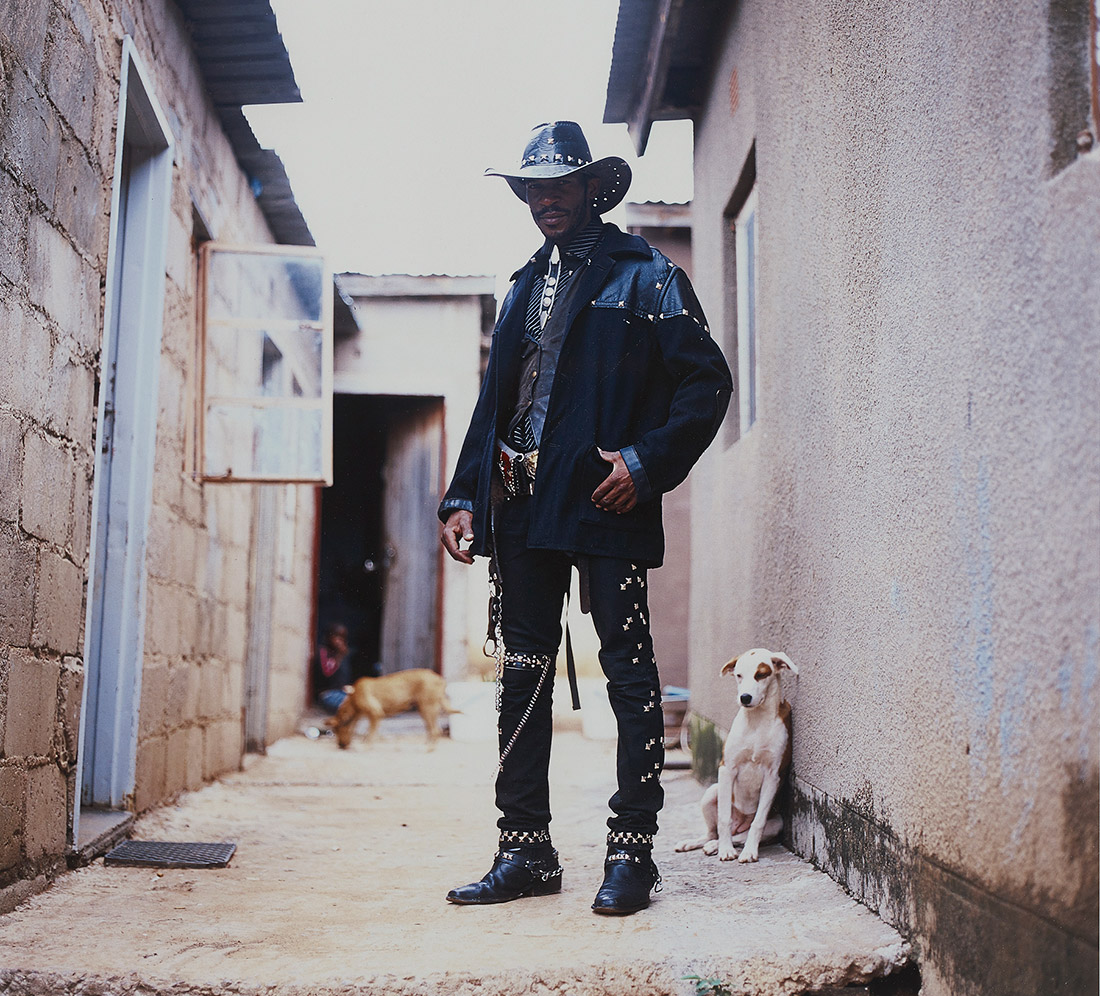 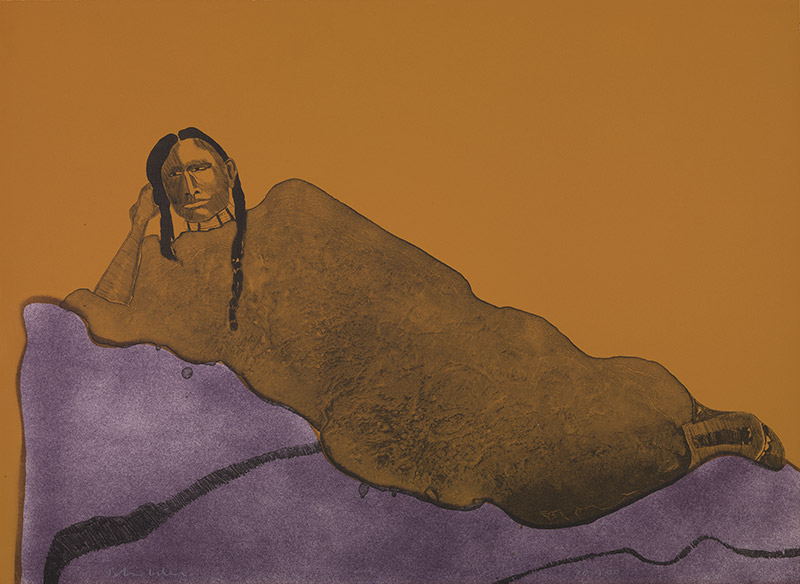 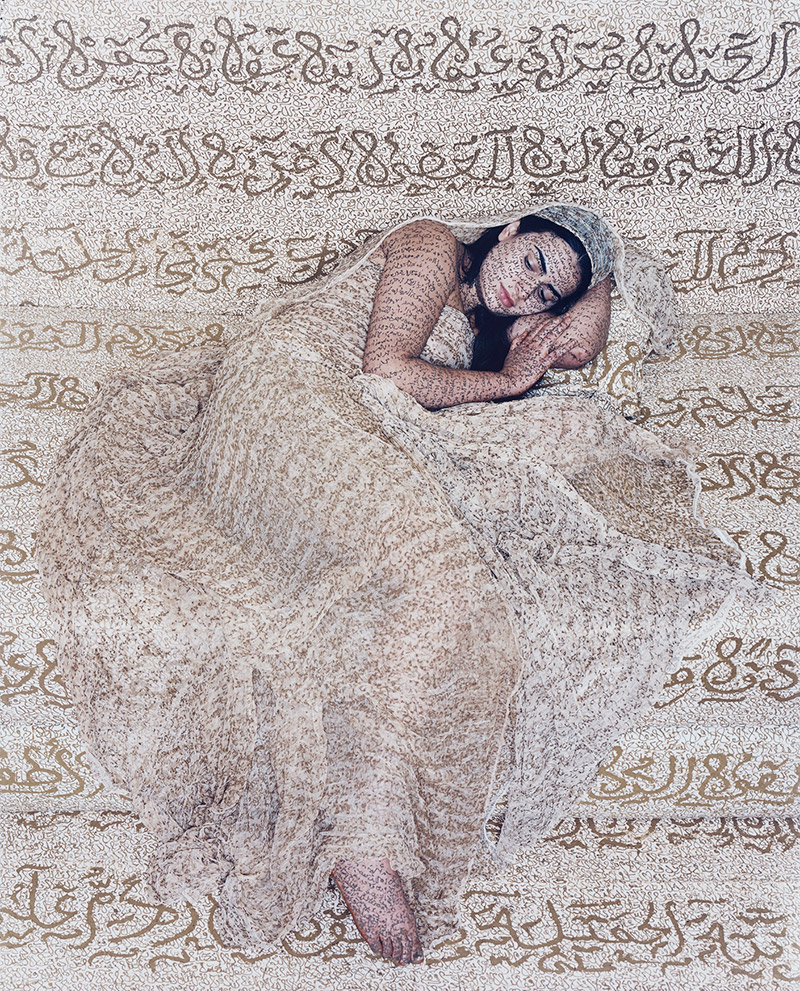 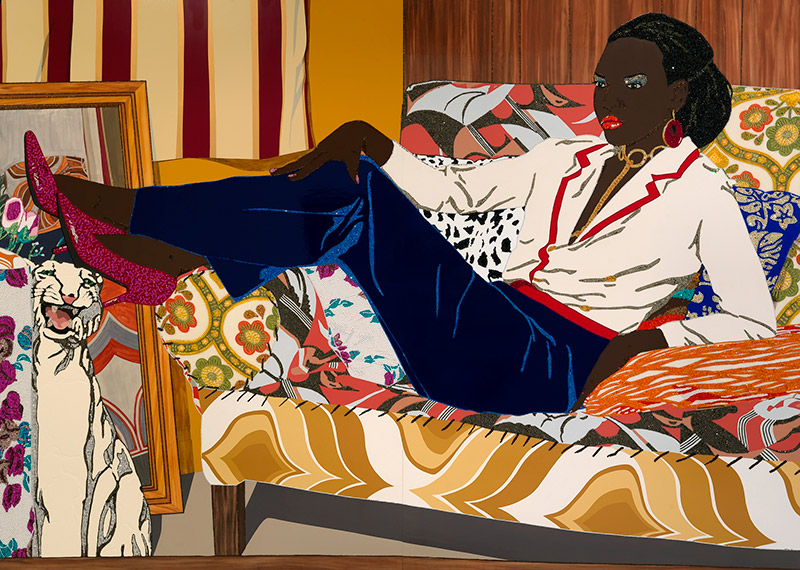 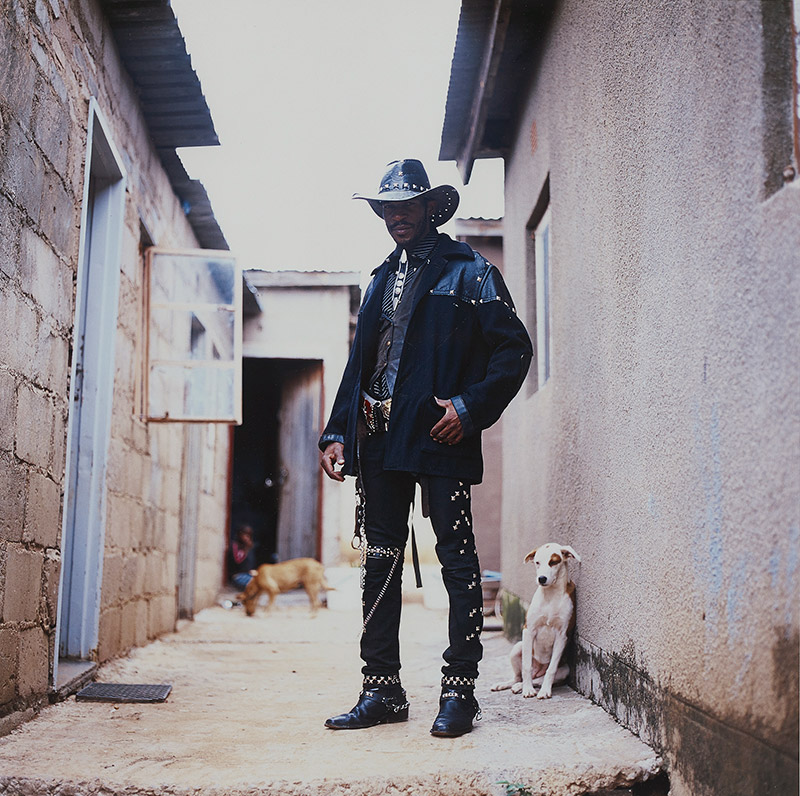 Fritz Scholder’s works foreground the reality of Native American life in contemporary society—alcoholism, oppression, the institutionalized racism that perpetuated a cycle of destruction and despair—alongside the hope, courage, and strength required to combat oppression. Using an expressionist pop art technique, Scholder responds directly to the monolithic construction of the Native American experience by inviting viewers to contemplate not only what it means to be an Indian artist, but also who decides what constitutes Indian art.

In Reclining Indian Woman Scholder recasts the exoticized reclining female—a convention that defined beauty and sexuality in Western European art—as a Native American woman. Works by canonical artists such as Henri Matisse fashion the reclining female as a sexually available, passive, and decorative body. Feminist interpretations of the reclining female in Western art have critiqued the inherent sexism of this stock figure. Scholder’s reclining woman is covered from head to toe, resisting the nudity of the Western trope of the reclining woman. Depicted in earth tones, the organic forms and lines that compose this semiabstracted figure evoke a mountainous landscape, hinting at her spiritual connection to the land. Here, Scholder responds to the notion of the sexualized Indian female as well as gendered representation in Western art by interrupting its exploitative energies. 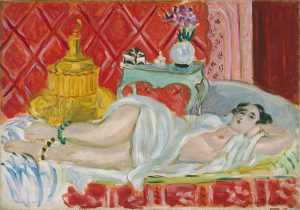 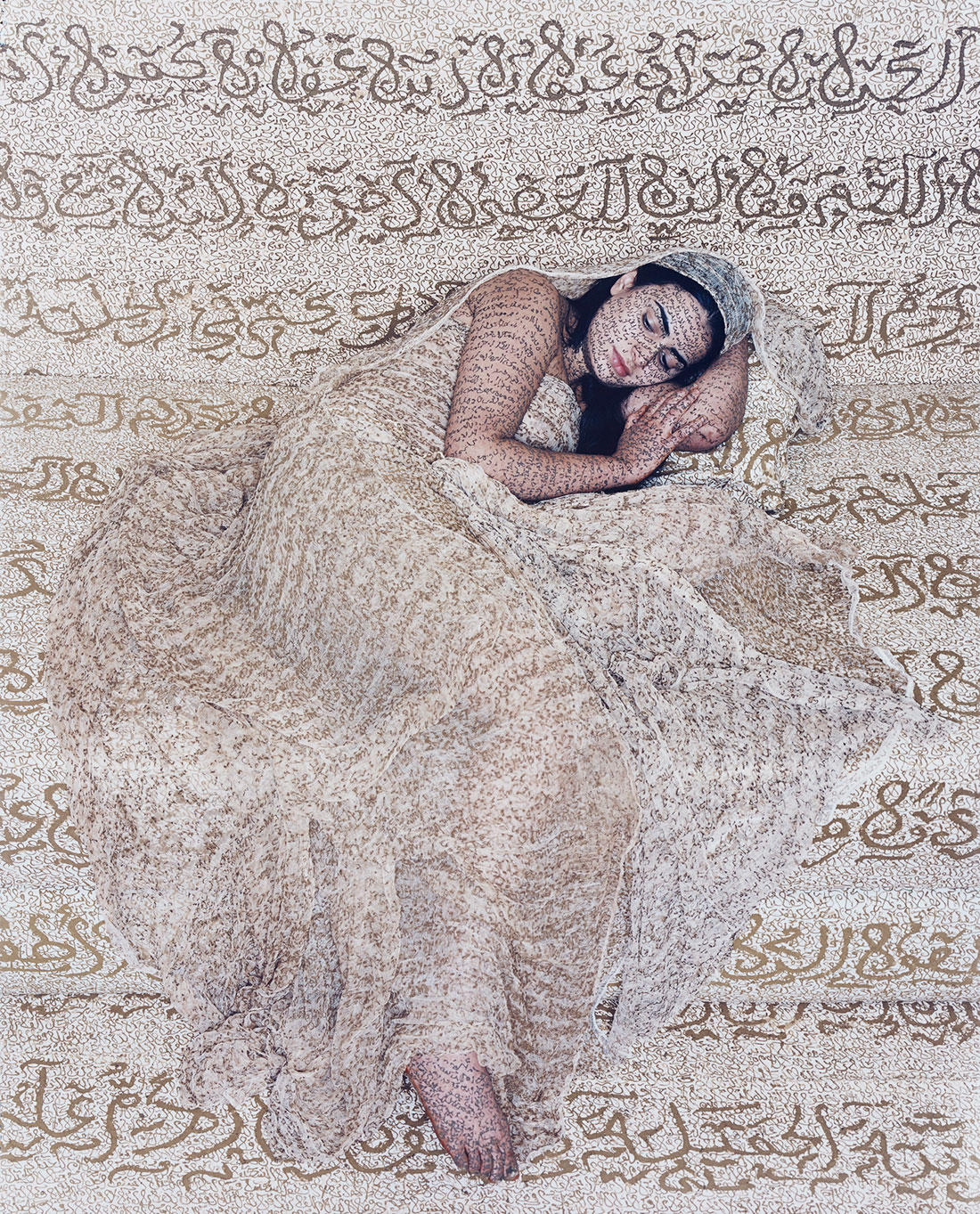 Essaydi considers the ways in which women have been relegated to the private sphere:

Traditionally, the presence of men has defined public spaces: the streets, the meeting places, the places of work. Women, on the other hand, have been confined to private spaces, the architecture of the home. Physical thresholds define cultural ones, hidden hierarchies dictate patterns of habituation. Thus, crossing a permissible, cultural threshold into prohibited “space” in the metaphorical sense, can result in literal confinement in an actual space. . . . I am constraining the women within space and also confining them to their “proper” place, a place bounded by walls and controlled by men. The henna painted on their bodies corresponds to the elaborate pattern of the tiles. The women, then, become literal odalisques (odalisque, from the Turkish, means to belong to a place).1

Essaydi’s photographs challenge the power of the male gaze to define and consume the female body as an object of desire. She calls upon the viewer to consider how stereotypes, often couched in beauty and adornment, actually serve to conceal and contain Arab women. Essaydi’s works also respond to canonical Western Orientalist paintings such as Eugène Delacroix’s Les Femmes d’Algiers (1834) and Jean-Auguste-Dominique Ingres’ Grand Odalisque (1814) that present French fantasies of sexualized, indolent Arab women and life in the “Oriental” harem. Les Femmes du Maroc Revisited #1 is inscribed with a form of sacred calligraphy that women have been denied access to, literally rewriting the narrative around Arab women’s agency. 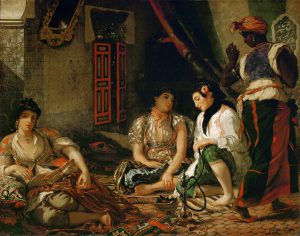 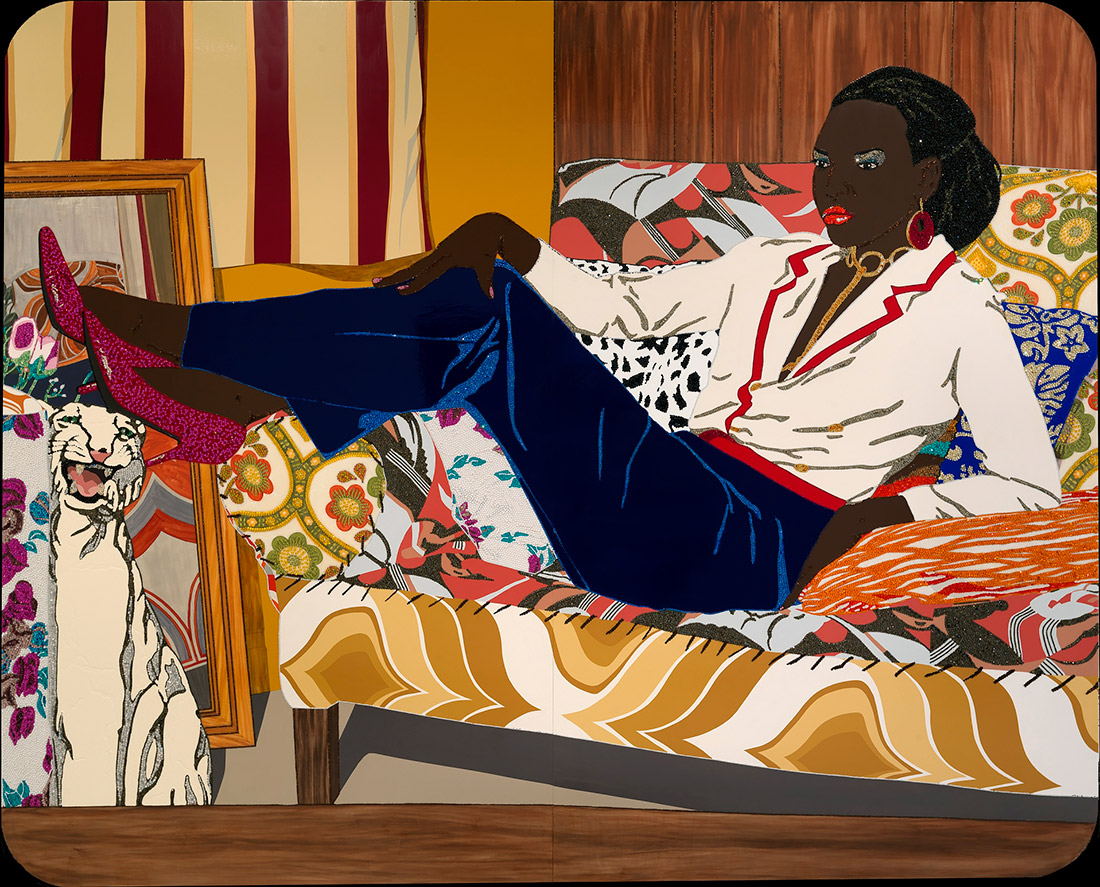 American mixed-media artist Mickalene Thomas draws upon 1970s “blaxpoitation” film aesthetics and art historical precedents to reframe the black female image in Portrait of Mnonja. Thomas’s reclining woman seems to relish in the very trappings of the stereotypes that have defined black women’s bodies from black movie vixen to exotic odalisque. Her self-conscious and assertive reclining figure challenges the stereotype from within the sexualized, cloistered female space of the Western imaginary. Yet, while Thomas’s images seem to meet and reject the expectations of a male gaze, the seduction is aimed at female viewership, queering Mnonja’s identity.3 The audacious beauty of the hyper-ornate collage painting spectacularizes these black goddesses who speak back, through, with, and around powerful racial and sexual stereotypes. Derek Conrad Murray explains that “Thomas endeavors to present a new black female subjectivity that (at its most effective) is both defiant and playful, even as it directs a critical lens on the culture that has all too often neglected or objectified the bodies of African American women.”4 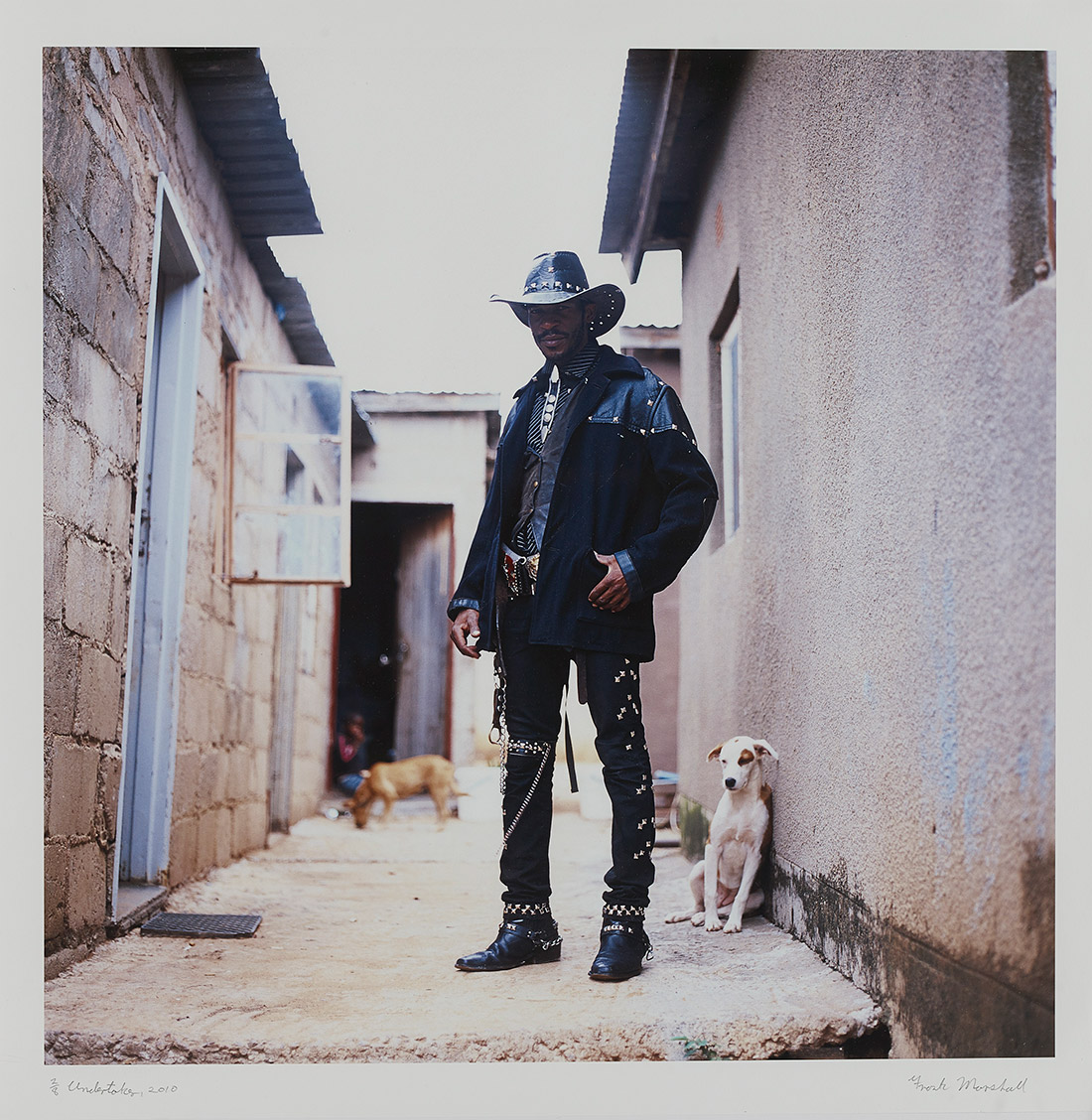 “The Batswana become the voyeurs of the old oppressor; The West becomes the fetish. . . .”2

South African photographer Frank Marshall reframes stereotypical notions of the postcolonial African male through his visual chronicle of the black heavy metal subculture in Botswana. Marshall’s photographic portraits of Botswanans who have embraced the music and lifestyle of Western heavy metal both assume and refute the culture typically associated with white male insurgency. His photographs aestheticize the mostly male Botswanan metal community’s absorption and regeneration of the style and attitude of this subversive identity. By adopting the outsider culture of Western heavy metal, “The Batswana become the voyeurs of the old oppressor; The West becomes the fetish. . . .”2
In Undertaker II from the Botswana Cowboy series, Marshall depicts this rebellious persona of the “Cowboy” dressed in studded black clothing with boots, spurs, and chains. Framed by modest dwellings, dogs, and a blurred child in the rear doorway, the photograph captures the socioeconomic realities out of which these renegade identities, formed from global associations, are burgeoning in Africa. Marshall’s photographs mythologize a group of young African men who defy stereotype from all angles.

The artists presented in Backtalk confront the absurdity of racial and gender essentialism and the social reality of the African, Native, and African American presence as a form of absence. Bodies are repositioned and made visible, often in the form of familiar gender tropes. Yet, because the artists attempt to redress the erasure of the lost body through the appropriation of stereotypes, the spectator is forced to consider whether the artists’ acts subvert the narratives they attempt to jettison, or reinforce them. For this reason, the burden of representation in their work falls as much on the audience as on the artists.